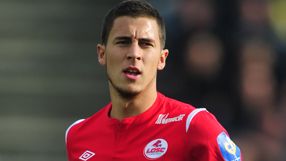 Hazard, voted the league's best prospect in the last two seasons, was a constant threat in a one-sided game, setting up Pierre-Alain Frau and Ludovic Obraniak either side of the interval.

Lille have 24 points from 14 games and lead Montpellier, who beat Nice 1-0 on Saturday, on goal difference. Olympique Lyon kept their title hopes alive when a Bafetimbi Gomis double gave them a 3-1 win at RC Lens in the late match.

An Anthony Modeste hat-trick lifted Girondins Bordeaux to a 4-2 win at bottom club Arles-Avignon but Lille made the headlines at Villeneuve d'Ascq's Stadium Nord with a powerful attacking performance.

"I did my job. My job is too be involved in the making of the goals," Hazard told French TV channel Foot Plus.

Frau was set up by Hazard's backheel and fired a skimming shot past goalkeeper Stephane Ruffier seven minutes before half-time.

But the home side dozed off early in the second half when Frau failed to clear a free kick and Adriano levelled with a spectacular bicycle-kick.

The home side were stung into action and Yohan Cabaye chipped a floated free-kick which struck Ruffier's left post.

Mathieu Debuchy unleashed a powerful low shot that was parried by Ruffier into Moussa Sow's feet but the forward skied his attempt over the bar with the goal gaping.

Hazard beat three defenders on the right flank before setting up Obraniak with a back pass for the Poland midfielder to beat Ruffier from just inside the box 14 minutes from time.

Monaco defender Laurent Bonnart acknowledged that Hazard had made the difference.

"He is a great player, he is able to see off a few defenders in the blink of an eye," he told Foot Plus.

"It's good to have such a player in our league."

At Lens's Felix Bollaert stadium, Lyon survived a poor first half to grab three points and move up to eighth, only two points adrift of Lille.

The visitors were nowhere to be seen before the break and Kanga Akale's opener was fully deserved for a Lens side who were on a five-match unbeaten run.

But France playmaker Yoann Gourcuff and Argentine striker Lisandro Lopez came off the bench to make all the difference.

With Lisandro troubling the Lens defence, Gomis found himself unmarked and levelled with a superb volley in the 64th minute.

The striker doubled his tally nine minutes later, heading home a Gourcuff cross and Lisandro put the result beyond doubt one minute from time.

The result left Lens in 19th place on 14 points.