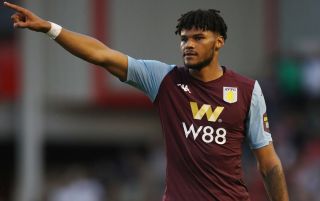 Tyrone Mings says being an England player seemed a world away when he was a non-League footballer working as a mortgage advisor.

The 26-year-old Aston Villa defender could make his international debut over the next few days having been given his first call-up by Three Lions boss Gareth Southgate ahead of the Euro 2020 qualifiers against Bulgaria on Saturday and Kosovo next Tuesday.

It has been some journey to this point for the Aston Villa player, who early in his career plyed his trade for non-League outfits Yate and Chippenham Town and worked as a mortgage adviser at London and Country.

Speaking at a press conference at St George’s Park on Wednesday, Mings said: “I had other goals at the time when I was a mortgage advisor and playing non-league football.

“Playing for England seemed like a different world away. I just needed to get back into the professional game at that point.

“I can’t say while I was sat at my desk cold-calling or trying to help people remortgage that playing for England was a real achievable goal.

“But as I’ve worked with some great coaches and been able to play for some great clubs, everything has kind of culminated together to get me to this point.

“At different times I’ve had to reassess my goals but it makes it all the more sweeter sitting here now.”

Mings went from Chippenham to Ipswich in 2012, subsequently signed for Bournemouth, and after spending time last season on loan at Villa joined permanently over the summer for a fee of £20million, rising to £26.5million.

Prior to his non-League stint,  Mings, who is six feet five inches, was with Southampton.

He smiled on Wednesday as he said it was true that they told him he was too small when they let him go as a youth, before adding: “I wasn’t big at the time. I probably wasn’t as physically developed as I needed to be to go into an Under-18 professional set-up, so I’m fully respectful of their decision.

“They were probably fully justified in their decision at the time.”

After facing Bulgaria at Wembley, England take on Kosovo at St Mary’s Stadium – but Mings says he holds no grudges towards Southampton.

He added: “It would be a fitting story if I made my debut at St Mary’s, maybe it would have come full circle, but I don’t think it would feel any more or less special doing it there than it would anywhere else.”

Mings spent time living in a homeless shelter with his sisters and mother as a child.

Asked about tough times he had growing up and subsequent charity work he has done, Mings said: “I think in moments of difficulty there’s always positives you can take from them and lessons you can learn.

“Everything I experienced growing up has given me an ability to empathise with other people, maybe outside of the game, or people that are not as fortunate as me.

“Not that I feel it’s my duty but I really enjoy being able to lend a hand and give back to people who are in situations that I wasn’t too far away from at a certain point in my life.”

Mings was also asked about the sense of openness with regard to the England squad at the moment and the way players like Raheem Sterling and Danny Rose have spoken out about racism and other issues.

And he said: “I think that’s an important thing for fans and everybody outside, or maybe not in direct contact with players, to be able to see that we are humans and we do have opinions.

“Sometimes people don’t always agree with our opinions, but we do have opinions and it is about speaking out at the right time on the right topics and putting our message across in the right way.

“People have spoken out about racism. Whether it be mental health, or any topic people feel strongly about, I think they should feel comfortable enough to kind of portray their personality.”