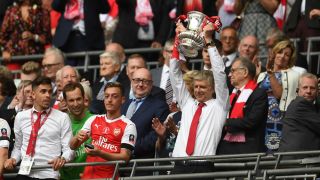 Arsenal great Tony Adams has questioned whether Arsene Wenger can "let go" of his job and urged the French manager not to spoil his reign by staying on.

Wenger guided Arsenal to the seventh FA Cup win of his tenure on Saturday with a 2-1 victory over Premier League champions Chelsea at Wembley.

While Adams was delighted for his former boss, he believes it is time for the Frenchman to depart Emirates Stadium as they have no realistic chance of winning the title.

"I was delighted for him on Saturday," he told the Guardian. "I've never seen him so animated. He was doing a lot of waving after the game. I don't know what that means.

"He's the greatest Arsenal manager ever so it would be sad if that was spoilt. Arsenal are not in the Champions League next season. I don't think they're going to be anywhere near the title.

"They've just had a fantastic FA Cup win after an amazing 20 years. I hope he calls it a day.

"Maybe he thinks they can win the league next year or get back into Europe. I don't know if he can let go."

Adams retired in 2002 after he and Wenger led Arsenal to a second Premier League and FA Cup double in five seasons.