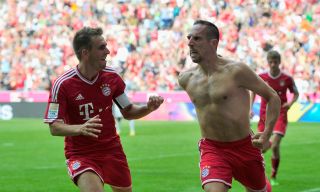 The German champions were made to work hard by their Bavarian neighbours and needed two goals in the last 21 minutes to maintain their 100 per cent record.

Franck Ribery put his side ahead after 69 minutes before Arjen Robben added another 12 minutes from time.

Lahm believes his team-mates put on a "determined" display to ensure the three points.

"We can be absolutely satisfied with our start. It was a determined team performance," said the Germany international, who supplied the cross for Ribery's header.

Lahm, who has been deployed in midfield on occasions this season, believes his game has altered under Pep Guardiola.

"My game hasn't become more attacking, because I laid on lots of goals last season but my game has become different."

Bayern are now one of four sides in the Bundesliga with unbeaten records as Borussia Dortmund, Leverkusen and Mainz also maintained their good starts.