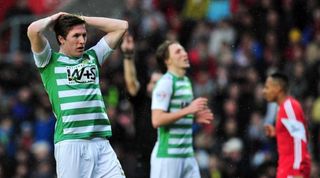 The league's bottom side took the lead courtesy of Hayden Hollis's 10th minute own goal but could not hang on, so their fate is sealed with four games remaining.

Paul Sturrock was appointed manager of the Somerset club this week, but was unable to make an instant impact and must now prepare for life in the fourth tier.

At the top of the table, Bristol City were unable to seal promotion after they were held to a 1-1 draw by second-placed Preston North End at Deepdale.

Aaron Wilbraham hit the crossbar early on for the leaders, before Jermaine Beckford coolly slotted home just before the hour-mark to put Simon Grayson's men in front.

However, that lead lasted just four minutes as Wilbraham headed home from Aden Flint's flick, preserving City's eight-point lead at the top of the table.

MK Dons wasted a chance to steal a march on the top three as they were held to a goalless draw at Port Vale, while fourth-placed Swindon Town were 1-0 winners against Peterborough United.

Sheffield United, who occupy fifth spot, fought back from two goals down to earn a 2-2 draw at Oldham Athletic, while Chesterfield were held 1-1 at Barnsley.

Rochdale saw their play-off charge stutter with a 1-1 draw with Doncaster Rovers, while Fleetwood Town and Bradford City's play-off hopes were hit by 1-0 defeats at Walsall and Gillingham respectively.