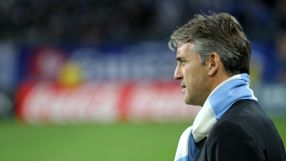 The level of expectation at what is now the world's richest club, who last won the English title in 1968, has risen dramatically since billionaire owner Sheikh Mansour bin Zayed Al Nahyan of Abu Dhabi took over two years ago.

Now after defeats to Arsenal and Wolverhampton Wanderers in their last two Premier League games and a poor 3-1 loss to Lech Poznan of Poland in the Europa League on Thursday, Mancini faces two tough matches in the next few days against high-flying West Bromwich Albion and Manchester United.

Another two defeats would increase the pressure on Mancini even more with the Sheikh's investment close to 600 million pounds, according to accounts issued by the club last month.

For that money, he wants Mancini to produce a side that, even if it does not win the title this season, at least finishes high enough to qualify for the Champions League next season.

However, City's lacklustre showing in Poland, following their two Premier League reversals, is raising doubts about that possibility.

Although City remain fourth, the competition for the top places is intense with Tottenham Hotspur and West Brom right behind them and both Everton and Liverpool showing signs of joining the chase after recovering from their poor starts.

The Italian, who replaced Mark Hughes as manager last December, confounded some observers after the defeat in Poland when he defiantly said: "I'm disappointed because we did not deserve to lose the game.

"At the moment everything is going against us but this is football. We have lost the last three games but I am happy because the players did well and we kept going."

Before the match he told the Italian newspaper Il Secolo XIX that he did not fear for his job either.

"Why should I worry about being fired? This does not exist. The team are against me? Lies, all rubbish. There were hard discussions with some players, but the team are following me and the results are arriving."

He also accused the English media of inflaming talk of ructions among his players.

"The tabloids rage on us because City are headed by an Italian. I'm sorry to say but the English are nationalists in football."

City's players have not helped their manager by arguing on the field with each other at times during their recent defeats and their form has dipped alarmingly since they rode their luck to beat Blackpool 2-1 on October 17 when they were second in the table.