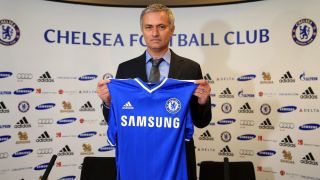 Jupp Heynckes' appointment at Bayern Munich on a deal until the end of the season is the latest example of a coach returning to an old club.

Football's managerial merry-go-round sometimes sees the same faces jumping back on the same horse for a second spin, but is that always a wise decision?

The history of such moves is a chequered one and here we take a look at some of the lessons that even the 72-year-old Heynckes could learn from.

The self-titled Special One needed to produce some extraordinary results to back up his big talk and he did just that at Stamford Bridge.

Fresh from a stunning Champions League success with Porto, the Portuguese led a Blues revolution in a first spell that yielded two Premier League titles, two League Cups and one FA Cup.

Backed by the immense financial might of owner Roman Abramovich, there was one honour that eluded Mourinho at Chelsea, as European supremacy proved beyond his grasp.

He was sacked in September 2007 and Chelsea reached the Champions League final that same season under Avram Grant.

Stellar names followed Mourinho into the hot seat, but he loomed large as a point of comparison to the likes of Luiz Felipe Scolari, Guus Hiddink, Carlo Ancelotti and Rafael Benitez.

When he returned in 2013, via spells at Inter Milan, where he was once again crowned king of the continent, and Real Madrid, it was as if a hero had come back to west London. All of his indiscretions were forgiven and none of his successes forgotten.

That second stint brought another top-flight crown and a further League Cup triumph. When he left again in December 2015 following an abysmal start to Chelsea's title defence it was, the club said, "on good terms", adding that Mourinho "will always remain a much-loved, respected and significant figure at Chelsea".

However, that promise appeared to have been forgotten when Mourinho was booed by fans and labelled a 'Judas' on his return to Stamford Bridge with Manchester United in March 2017.

The belligerent Dutchman was linked with the Bayern job himself, which again would have represented a return to an old stomping ground.

He is a man not unfamiliar with revisiting his past, having twice managed both Barcelona and his home country.

It was at Camp Nou that he sought to cement his reputation as a world-class coach, having caught the eye of the Spanish giants during a trophy-laden six-year Ajax reign.

However, it was not quite the experience Van Gaal had anticipated. He clashed regularly with the media, detracting from his on-field achievements, which saw Barca add another two LaLiga titles to their collection.

Perhaps, having followed on from the more amiable Bobby Robson, Van Gaal appeared positively hostile in comparison and that persona did not help his cause.

He left in May 2000 and fired a telling parting shot.

"The president [Josep Lluis Nunez] took me on for my philosophy and personality, and also the gameplan of my Dutch team, Ajax," he said.

All that was apparently water under the bridge by the time 2002 rolled around, as Van Gaal was appointed for a second time.

This time the results were largely disappointing and his headline signings, notably Juan Roman Riquelme and Gaizka Mendieta, failed to live up to the hype.

A prior falling out with Rivaldo saw the Brazil star released and, all in all, it was not a happy return for Van Gaal.

'King Kenny' earned his royal moniker at Anfield with success as a player and a manager, combining both duties in his first spell at the helm.

The Reds' maiden league and FA Cup double came under his guidance in 1985-86. He was also responsible for bringing in names now synonymous with the Merseysiders, signing Peter Beardsley and John Barnes ahead of his third campaign in charge.

With such talented players at his disposal, not to mention his own sublime talents, Liverpool played a striking brand of attacking football that produced that magical blend of entertainment and results.

Despite some blips along the way – the infamous 1988 FA Cup final loss to Wimbledon among them – Dalglish created a legacy at the club not only through triumphs, but also the tragedy of the Hillsborough disaster, when his strength of character was readily apparent.

The record books speak volumes to his influence, with three league titles as Liverpool's manager and two FA Cups.

He later won the Premier League with Blackburn Rovers and endured undistinguished tenures at Newcastle United and Celtic, where his playing career had begun.

Having returned to Anfield in 2009 as part of the youth set-up, Dalglish found himself back in the top job following the end of Roy Hodgson's short-lived rule in 2011.

The fiery Scot brought in Luis Suarez and Andy Carroll, those two arrivals capturing the stark contrasts of his time in the job.

He delivered the club's first trophy in six years with victory in the 2012 League Cup final, but lost the FA Cup final that same year.

Those cup exploits mattered little when weighed against Liverpool's league form, though, as they finished eighth, some 27 points behind winners Manchester City.

Dalglish was sacked in May 2012, but seemingly had no regrets.

"It has been an honour and a privilege to have had the chance to come back to Liverpool as manager," he said.

LFC are delighted to announce the Centenary Stand at Anfield will be renamed The Kenny Dalglish Stand.Full story: 3 May 2017

OTHER  NOTABLE MANAGERS WHO WENT BACK...

Marcello Lippi had two spells with Juventus and with Italy.

First time around at Juve he won three Serie A titles and the Champions League, while his second coming yielded two further top-flight titles.

Having won the 2006 World Cup with Italy, he promptly left the role but came back in 2008. His attempt to guide his country to another world title ended in humiliation as Italy finished bottom of their group at the 2010 tournament.

Lippi's compatriot Fabio Capello is another man to have taken on the Juve job, but it was at Real Madrid and AC Milan that he had two cracks of the whip.

At San Siro he won four league titles between 1991 and 1996, throwing in a Champions League title for good measure. Second time around, Milan finished 10th in his sole season.

His two spells at Madrid came a decade apart and both produced LaLiga honours, but no more. His defensive style of play won few admirers among the Santiago Bernabeu faithful.