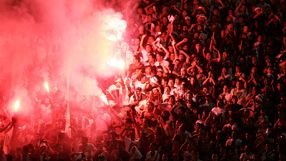 The 23-year-old Alianza Lima fan died at the end of Saturday's derby game against arch-rivals Universitario, who were hosting the match at their Monumental stadium.

Witnesses said the victim fell from a VIP box when Universitario fans burst in and attacked the occupants, which included children, in an incident which shocked the country.

They said there was no policing in that part of the stadium.

"We're going to close the stadium until we have investigated what has happened and this deplorable act has been punished," Oscar Benavides, the mayor of the Lima district of Ate, told Peruvian television.

"The directors of the ADFP have agreed that, until the disciplinary tribunal makes a decision, no more matches will be scheduled in the Monumental stadium," said the league on its website.

It was barred from hosting derby matches for several years after incidents at a previous Alianza-Universitario derby.

Despite being the country's largest stadium, Peru still stage most international matches at the more central National stadium, which has recently been modernised.

Universtario's official website made no mention of the incident on Tuesday although it posted an item, apparently before the match, promising "Security will be guaranteed for the Clasico."

There were several insulting and apparently uncensored comments from users posted at the bottom of the page after the incident.