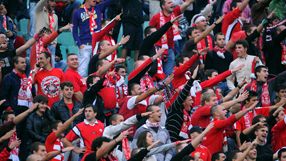 The crowd applauded in the 19th minute in Sevlievo to commemorate Petrov's shirt number at his English Premier League club Aston Villa.

All the teams in Bulgaria expressed their support for the player in various ways at their weekend matches.

Villa fans also applauded Petrov in the 19th minute as the midfielder watched his side lose 4-2 at home to Chelsea on Saturday.

CSKA and Vidima-Rakovski players wore T-shirts sporting his name and with the message "We are with you" during the warmup.

CSKA, 31-times champions, are chasing their first league title since 2008.