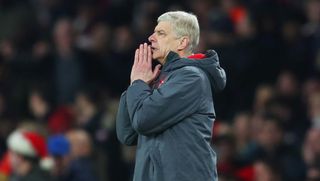 Arsenal manager Arsene Wenger insisted he was still committed to the Premier League club and had no plans to leave before the end of his contract in 2019.

Ahead of a trip to Bournemouth on Sunday, Wenger is under some pressure with his side sitting sixth in the table – five points behind fourth-placed Liverpool.

Wenger, 68, signed a new deal at Arsenal last year and said he was as committed as ever to seeing out his contract.

"Did I ever walk away? Never. Why should I change?" he said. "I'm always committed.

"I'm here for 21 years. I just do, in every single decision I make, what is right for the club.

"If I stay for one year or 10 years, it's exactly the same," he added. "If it's me in charge or somebody else, you can only do what is best for the club. And that's what you try to do.

"That has nothing to do with my personal situation."

Wenger has been in charge at Arsenal since 1996, winning three Premier League titles and seven FA Cup trophies.