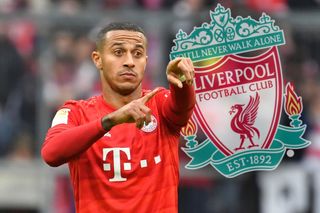 When Liverpool were first linked with Bayern Munich midfielder Thiago Alcantara at the end of June, it was widely viewed as one to file under 'not happening'.

But such links have increased, with some reports even claiming a deal is "very close", others saying personal terms are agreed, and Bayern Munich's senior hierarchy confirming both that the player will depart the Bavarians this summer and that there is interest from Liverpool.

That Liverpool's interest hasn't been denied by local Merseyside-based journalists who are usually quick to quash such reports, is perhaps indicative of there being more to it than initially it appeared.

Like many things, there's two sides to the Thiago to Liverpool story: on one hand it makes no sense at all; while on the other it makes complete sense.

Why Thiago to Liverpool makes no sense

Thiago would not be a typical FSG and Klopp signing, primarily due to his age, having turned 29 in April this year.

The only outfield player signed under Jurgen Klopp over the age of 26 is Ragnar Klavan.

Signing a 29-year-old would be an exception to Liverpool's rule of signing young players yet to hit their prime; players who Klopp can mould into his system.

It's claimed that Bayern want around £30 million for the player - with his contract expiring next summer - and he is reportedly on around £200,000 per week.

With Liverpool pulling out of the deal for 24-year-old Timo Werner for financial reasons, the links with Thiago, then, seem sceptical.

It would, on the face of it, seem like centre midfield is the last of priorities this summer.

However, Thiago is in the same situation as Wijnaldum in that he is also 29 and his contract expires at the end of next season.

Therefore, it could be a case of one in, one out...

Why it makes complete sense

And that is where it starts to make a lot more sense: few could deny that Thiago would be an upgrade on Wijnaldum.

Thiago creates more chances, with double the number of key passes per game than Wijnaldum this season. Over the last three seasons, Wijnaldum has a total of five assists, whereas Thiago has 14, despite making 29 fewer appearances.

The duo's goal ratio is similar on the past three seasons, with Wijnaldum on 12 and Thiago on 13, but again, one goal more in 29 fewer appearances means Thiago's output is significantly higher.

Another reason Liverpool's interest makes sense is that we know Klopp is a huge admirer of the Spain midfielder.

When Klopp signed Naby Keita in 2017, he praised: "Last year together with Thiago Alcantara, who played outstanding for Bayern, he was the flier." He also said in the same year:  "In my time in Germany, I admired Thiago Alcantara."

Meanwhile, the player himself is also an admirer of Klopp's, saying in 2018: "I love watching English football. It’s the league I most enjoy.

"Look at Liverpool’s midfield: Henderson, Milner, Chamberlain, they pressed like animals in the Champions League. They ate up the midfield. They were fantastic."

Evolution (or: How Liverpool can win the Premier League next season)

When Klopp was quizzed this week on how his Dortmund side won back-to-back Bundesliga titles, the manager mentioned the signing of Ilkay Gundogan.

"You have to improve, it's not important what you did last year," explained Klopp.

And this is where Thiago could come in. Football teams evolve, improve and adapt. There is little room for sentiment if you want to keep winning trophies and difficult decisions must be made.

Liverpool cannot afford to stand still just because they have won the league: their competitors won't be.

Thiago would provide something that supporters have long suggested as a weakness in the side, that being creative impetus in the midfield.

Klopp knows that teams will analyse and adapt, finding ways to neutralise Liverpool's threat from full-back. Having another method of attack would continue this team's evolution under Klopp - who said recently that he believes he is only two years into the squad's development.

There is a long-term vision to keep Liverpool at the top of English and European football and Thiago could be central to that.

As for his age, Thiago is a similar age to Xabi Alonso when he signed for Real Madrid, with the Spaniard going on to play for Bayern until just shy of his 36th birthday. Similarly, Luca Modric is still pulling the strings for Real at age 34.

And on the competition for places in midfield? If Wijnaldum were to leave, which would make sense while he retains a re-sale value, and Milner were set for a reunion with newly-promoted boyhood club Leeds United, plus Adam Lallana leaving, it all starts to make more sense.

Jones could well become more of a backup to Sadio Mane on the left of attack, a role he played regularly for the under-23s and which could suit his early years in professional football.

It would likely mean a 'first choice' midfield of Fabinho, Thiago and Henderson, with Keita and Oxlade-Chamberlain adding quality depth and rotation options.

Whatever the outcome, being linked with a player of Thiago's pedigree shows one thing: Liverpool are planning to stay among the pinnacle of European football.