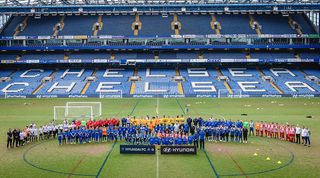 Hyundai has put grassroots football first in 2019-20, partnering with Chelsea to offer some unforgettable experiences to young players and coaches.

So far, the initiative has provided a variety of unique opportunities for 11 boys’ and girls’ teams from around the UK.

On top of new strips and a Stamford Bridge pitch day, Chelsea laid on a special session at their Cobham training base for the grassroots coaches. They were also sent bespoke training plans for the campaign ahead, and received multiple visits from the Blues’ team of expert Foundation coaches.

As a result, more than 150 youngsters from under-8 to under-16 levels have been making the most of the project, highlighting Hyundai’s 20-year commitment to putting the fans first.

“Chelsea Foundation coaches have travelled up and down the country providing bespoke training sessions to clubs who have never had access to this level of coaching before,” says Rory Bidgood, an international development coach with the west London giants. “It’s been rewarding to watch the players and coaches grow throughout.”

Ashley Andrew, the Managing Director of Hyundai Motor UK, said, “The response we’ve had from players, coaches and parents has been so positive – everyone has been able to benefit from these really special experiences with Chelsea.”