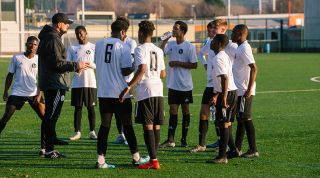 Being a professional footballer is for the few, rather than the many – but even the widespread acceptance of such a harsh reality doesn’t kill the dreams of aspiring youngsters who have been forced to face up to it.

ProChance’s ultimate mission is simple: working with promising players between 15 and 19 who are currently on the outside of professional football, offering them another way in with invaluable opportunities they thought were lost outside of life in an academy. Their industry experience and strong contacts within the game mean they can get talented players in front of key decision-makers at professional clubs – as they did in December, with a match against Huddersfield’s development squad.

Two of ProChance’s players from that match, Hans Mpongo and Lamar Moore, have both been through the trials and tribulations of professional football academies before being cut loose. Thanks to their involvement with ProChance, however, the two 17-year-olds may yet realise their ultimate aim of turning pro – both have the opportunity to take a giant step towards that with upcoming trials.

Neither have had things easy up to this point, however.

Mpongo arrived in England from the Netherlands aged 14, having grown up in Den Haag and then moved to south London with his mother in 2016. He represented his country of birth in a 2015 tournament in Morocco, but explains that other factors got in the way of better things.

“I was playing for my local club from when I was six or so, but then I moved up to a higher team,” he tells FFT. “I was there for around three years and got scouted by Sparta Rotterdam. I was going to sign there, but because I didn’t live in the city, my mum couldn’t really pay for the travel to get me there. For them to pick me up we would have had to pay as well, so unfortunately I couldn’t go there.

“After playing for Holland – it was a mini World Cup, really – we moved to England the following year. It wasn’t easy because everything was so different for me and my mum – life, football. It was only my auntie who we knew here.

“The first time I played football in England, the physicality was up there – way harder than anything I’d been used to. In Holland, everything was focused around keeping the ball on the floor, but here everything was in the air. I really, really struggled at the start, so I had to adapt quickly. The intensity here is higher.”

But Mpongo did adapt quickly. After playing school football and trying his hand with two local clubs, the attack-minded youngster was eventually spotted by a scout from Norwich City and invited for a trial. Though the Canaries didn’t take things any further, the experience was invaluable.

“I wasn’t ready then,” admits Mpongo. “I was so disappointed – actually, I almost cried – but I’d only just come to the country. Being at Norwich really opened my eyes to how difficult it is to become a professional footballer. When I was in Holland, I always thought I would make it – but it was good that I came to England, because it really hit me about what you needed to get that far. It woke me up. In England, you really have to work hard to become a pro.

“I stayed with the same team after that, but didn’t really know what to do anymore. I stopped playing football with a proper team for around a year, but I live in an area of London where you either play football or end up doing road stuff. Me being new to the area, it was all a surprise to me – I never knew how bad it was until I saw things happening with my own eyes. It shocked me, and in the area I live, it scares you. You have to choose one path – and ultimately, I decided that I wanted to play football.”

After some successful matches with the district team and discussion with his maths teacher who also doubled up as a football coach, Mpongo was introduced to his future mentor Don Ubah, who runs the Albatross Academy for aspiring players in London. Don introduced Mpongo to Liam Sutcliffe, head coach of ProChance, and Hans featured in the showcase match against Huddersfield in 2019.

“It’s a really good opportunity to show what you can do,” he says. “Liam has a lot of influential contacts and a lot of scouts attend these games, so it’s a really good stage to show off your ability and make the best of that situation.”

Moore, meanwhile, lives with his grandmother in Croydon. He has previously been attached to a number of professional clubs – but thanks to the help of ProChance, the teenager is hopeful of better things to come.

“My experience hasn’t been the best,” he tells FFT. “I was at Fulham when I was younger, but then I stopped. I started playing properly again in Year Nine, and then my brother had an agent/mentor who helped me – I wasn’t fit or anything like that, so he helped me to improve that side of things, although it didn’t lead anywhere.

“Eventually, I went to AFC Wimbledon for my first trial at 14, but didn’t really do my best because I was nervous. I wasn’t ready, but it was a good experience. I went to Scunthorpe with Hans, then after that went to Leicester and Charlton. I was there for six weeks with the latter and was supposed to get signed, but they chose someone else unfortunately.

“You just really want it in those situations. I was trying to go to all of these different clubs but nothing was working, even when I was doing everything they were asking of me. It’s just really frustrating, I guess – it gets quite exhausting.

“After Charlton, I went to Birmingham when I was 15, but got injured when two centre-backs absolutely clattered me. My right leg was fractured and I couldn’t play for about nine months. But that injury was kind of a booster in a way – it was a chance to start afresh and show what I could do. I’d gone through quite a bit of disappointment before that, but it actually allowed me to just look ahead and put everything in from now on.”

Moore – a utility player capable of playing in as varied positions as central midfield, left-back, centre-back and upfront – joined a college football programme for some game time to boost his confidence. He also featured in the Huddersfield game, only for even better things to be thwarted by the coronavirus outbreak.

“I think I did well against Huddersfield,” he reflects. “It just felt like a normal game against another team, to be honest. It wasn’t a match where I felt out of my depth or anything like that – I felt quite comfortable.

“I like the fact that they’re giving players like me, who aren’t in academies, the chance to play against those sides and show what we can do. To get a good game in against a side like Huddersfield Town’s development side was great.

“I was supposed to go somewhere for half-term, but because of the virus it got postponed. But with the help of ProChance away from the showcase events, and the guidance they give to help us with our fitness and mentality, I’ll be ready for the next time.

“I want to make sure that when I do go somewhere, I’ll be ahead of others and able to perform my best. Not everyone is going to work out during this period, so if I do, I’ll give myself the best chance of doing well.

“If I was me two years ago, I would feel pressure – but I feel like now, it’s different. I’ve gone through that stage of my life and don’t really feel that anymore; I know how to deal with it.”

ProChance head coach Liam Sutcliffe added: “We are not an academy nor are we a professional club, but we can behave like both in order to ensure that players are given the best opportunities at the right time.

“ProChance provides a substantial support structure which incorporates mental development, nutrition, wellbeing and performance analysis – which means we may be able to expedite the process for players.

“Professional clubs are getting the chance to look at well-rounded players, with the level of ability the clubs are looking for, who are well prepared to take an opportunity.”

FourFourTwo.com created this content as part of a paid partnership with ProChance