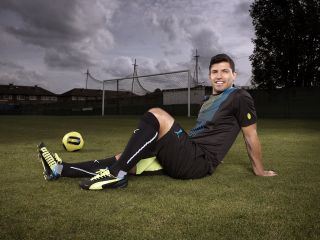 A smile envelops Sergio Aguero's immaculately groomed face. An impish glint flashes into his deep brown eyes. "Hey, guys," he says to three young lads who have been helping prepare Flixton FC's compact Valley Road ground in west Manchester for a photo shoot, "fancy a bit of 2v2?" Agog, they have a five-minute kickabout they'll be dining out on for years.

Less than 24 hours earlier, and 22 minutes into Manchester City's opening game of the 2013-14 Premier League season, Aguero had Newcastle United's defence similarly bewitched. Despite missing every pre-season friendly with a troublesome knee, the bustling forward controlled strike partner Edin Dzeko's flick in an instant, shrugged off Steven Taylor's attentions and fired an unerring finish beyond keeper Tim Krul. The second in a 4-0 win, it was the least last year’s runners-up deserved.

Sitting down for an exclusive chat with FFT.com in the Flixton centre circle, the stocky Argentine animatedly explains how he did it. "Those goals are always difficult to score but it was a beautiful moment," he says in his native Spanish, a blur of hand signals enthusing their way through the previous evening’s events. "I'd seen Krul at his near post earlier and knew straight away I wanted to shoot across him with a lot of power and, thanks to God, it went exactly where I wanted it to."

He's being modest, though – that finish was about more than divine intervention. It was the goal only a Potretista, a street footballer, could score. Brought up on the rough streets of Los Eucaliptos, one of Buenos Aires' most notorious districts, the young Aguero grew up playing young and old, skilful and rough. His former City boss Roberto Mancini once called him "a photocopy of Romario, they're basically the same player". The Brazilian is another dirt pitch-reared urchin of the underground.

“A football education on the street is a great start," Aguero recalls. "It's had a huge influence on my career because it makes you strong, especially when playing against older guys, and teaches you the spirit that's necessary to become a footballer and be a winner. Every year there are fewer of us street guys, and I think something is lost from the game. I hope that changes because you learn skills and how to improvise in a way you don't anywhere else."

That street-inspired goal is the first of what Aguero hopes will be many in a hugely important nine months at the Etihad, following a season without silverware that cost Mancini his job. "We need to win a trophy," he says, "and there's none more important than the Premier League. We definitely have a team that can win the title, and why not the Champions League, too!”

What would it mean to knock their city rivals back off their perch this season?

"Our objective is to keep fighting to reach to the top, and if that means taking on Manchester United all the better. We know any game against them is a matter of life and death for us, especially the fans, and you have to win it. We've got the team to beat anyone and we're ready for the challenge.

"You can't win everything, Chelsea and Spurs have good squads too, but as players we need to find the commitment to do things better because we've made some excellent signings and have the talent to do great things this year. We go into the season wanting to win everything."

Aguero may be talking about new arrivals Alvaro Negredo, Stevan Jovetic, Jesus Navas and Fernandinho – the latter two, in particular, impressing on their debuts against Newcastle – but it's in the dugout that a fresh face may be best felt. Coach Manuel Pellegrini’s love of attacking football took minnows Villarreal and Malaga in the Champions League semi-finals and last eight respectively, his one season as Real Madrid manager yielding a better win percentage than Jose Mourinho.

“Each manager has their style of play, which we have to respect and follow because they're the boss,” believes Aguero. “Pellegrini's tactics are a bit different, and he's been talking a lot about those in pre-season. I can't give them away too much just yet, but you’ll see as the season goes on.”

A bustling bundle of chaotic attacking energy, Aguero averages better than a goal every other game for City, a return that proves his pure statistical worth since 2011’s £38m transfer from Atletico Madrid. But it’s his inventive link-up play – “he never does the same thing twice, he's always inventing something new,” former Atletico coach Javier Aguirre once said – as a second striker that most enchants about the pocket Argentine.

“For most of my career I've played behind a striker, but close enough to form a partnership with them. That's where I think I play best. I'm looking forward to playing with Dzeko, Negredo and Guidetti this season and being right by their side.”

Questions about Pellegrini’s predecessor Mancini are flat-batted. “Whenever a team isn't at its best, the press are looking for stories to explain why,” Aguero says. “Mancini never had a problem with anyone and we got on well with him because he always had the club's best interests at heart. The club have the right to decide whether he was going to stay or not at the end of the season, but there certainly weren't any problems from us.” Off the record, his team-mates have been much less magnanimous.

As the conversation turns to another departed colleague, Aguero’s eyes light up at the mention of Mario Balotelli. “I’ll tell you what,” laughs City’s 25-year-old talisman, “Mario is crazy! I used to call him El Loco Lindo [the Brilliant Mad Lad]. I got on really well with him – he was a great guy, really funny, always joking around with the rest of the squad. Whenever your back was turned in training, he'd start firing balls at you from anywhere! Everyone would be in stitches when he did it because we accepted it was part of his character. He was the dressing room joker, no question!

“I’ll miss Carlitos Tevez, too. I’ve known him for a while and he's a great player, someone I've always got on with, and it was great to spend a couple of seasons here with him. He really helped me settle. I wish him all the best at Juventus.”

As our time winds down on an unusually sunny Manchester day, FFT presents Aguero with a choice: winning the league by 20 points or scoring another last-minute winner like Queens Park Rangers in 2012. For the first time, his thoughtful, considered answers are replaced with an instant response and howling cackle.

“Oh, god, winning the league by 20 points without a doubt” he screams. “I've already suffered enough to have to go through that again! In fact, why stop at 20: why not 25, 30 points?! QPR was an incredible moment but what I went through in that game was something I'm not sure I'd like to experience again!”

With that, time's up. Aguero wishes FFT all the best – we return the pleasantries, naturally – with a shimmering smile and firmer-than-expected handshake before he signs a few autographs and photos for the still star-struck kids. "After today, I can nearly forgive him for robbing us of the title in 2012," laughs a United-supporting parent, as his fiercest rivals' leading star exits stage right.

Be careful what you wish for, sir, because Sergio Aguero might just do exactly the same thing, come May 2014.