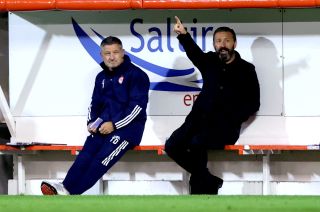 Aberdeen manager Derek McInnes was understandably delighted with his side’s performance after they kicked off their Europa League qualifying campaign with a 6-0 win over Faroese side NSI Runavik.

Lewis Ferguson’s header and a tap-in from from Curtis Main had the home side on easy street by half-time, but it was substitute Ryan Hedges who became the star of the show, netting a second-half hat-trick punctuated by a screamer from Jonny Hayes.

And McInnes could not hide his pleasure, commenting: “It’s a pleasing night’s work any time you rack up that amount of goals and a clean sheet.

“I think what pleased me most was the intensity of the game. Runavik are 18 games into their season, and we had to play the game we play in Scottish football. We couldn’t let them get comfortable and play their own game.

“This was the kind of game we needed. It reminded the players that they’re good players, Ryan coming on and getting a hat-trick, he’s away feeling good about himself as well.

“When I watched Runavik, I wanted to make sure we made them defend their box and having a physical striker in Main to play alongside Marley (Watkins) was something I was keen on. He’s a good bit behind in terms of fitness and it was good he got the goal before he came off.

The Dons tackle Hibernian on Sunday but face a Scottish Football Association disciplinary hearing on Friday which could see the ‘Aberdeen Eight’ punished by the governing body for their coronavirus guideline breach, and McInnes has no idea what to expect.

“The players have been through a lot, they’ve been heavily fined. If people want to keep punishing them we’ll deal with it,” he added.