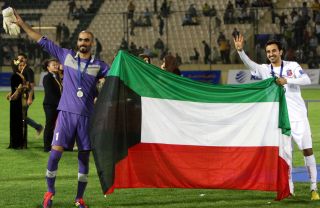 Ion Marin's men added to their 4-2 first-leg advantage with a comprehensive victory at the Salt Lake Stadium on Tuesday, as Kuwait moved to within one game of their third AFC Cup title.

Rogerinho and Hadi Khamees scored within the space of a minute just before the break, with Abhishek Das' own goal rounding off the scoring three minutes from full-time as both sides had a man sent off.

The home team set the pace early on in what was a frantic opening and could have gone ahead after 22 minutes when Chidi Edeh failed to convert a loose ball in the box following Lalrindika Ralte's free-kick.

James Moga's effort was then blocked by Musab Al Kandari before the hosts were punished for their profligacy when Rogerinho opened the scoring in spectacular fashion.

Starting close to the halfway line, the Brazilian surged past Arnab Mondal before finishing confidently, with Khamees adding a second a minute later before he was shown a straight red card.

The Kuwait international kicked out at Ugo Okpara and was dismissed, overshadowing what had been a solid half for the visitors.

Both sides were down to 10 men six minutes after the hour when Bengal's Arnab Mondal was sent off for bringing Rogerinho down when he was through on goal for his second of the match.

That killed off any lingering chance of Bengal producing a fightback, with Das turning Fahad Awad's shot over his own line as Kuwait moved into their fourth final in five years.