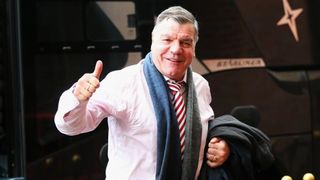 The Football Association's appointment of Sam Allardyce as the 14th permanent manager of the England national football team will invite predictable ridicule.

This is a man who, on more than one occasion, has lost his grip on club jobs due to a perception of playing lumpen, direct, unattractive football. For detractors who have previously lamented Stone Age football emanating from the British Isles, he is the perfect appointment for a soft-focus, black-and-white team in a technicolour world.

Allardyce's brash persona and nickname have become synonymous with all that is unglamorous about English football.

At his first news conference as Manchester City manager, Pep Guardiola - that epitome of footballing cool - took the time to highlight a clash with his perceived antithesis that will now remain in his imagination.

"Against Sunderland, against Big Sam, in the first one, I am sure it will be completely different," said the former Barcelona and Bayern Munich boss with slightly surprising familiarity.

As with most caricatures, attempts to cast Allardyce as yesterday’s man are not entirely fair. The 61-year-old has rarely missed an opportunity to talk up his use of new technologies, such as Prozone, while he is tactically pragmatic rather than dogmatic.

Derision over Allardyce's style was largely absent when he took a celebrated chance on bringing mercurial talents such as Youri Djorkaeff and Jay-Jay Okocha to Bolton Wanderers.

England are unlikely to be reduced to playing purely route-one football under his stewardship - even if Andy Carroll should be rightly buoyed by the appointment - but there will be no delusions of grandeur, meaning Allardyce could be the antidote to one of his national team's most long-standing ills.

From Hungary's Magical Magyars, to Alf Ramsey's Wingless Wonders and the vibrant glory of Brazil's 1970 World Cup winners, international football was once the stage for defining tactical statements that thrust the game forwards.

Even the most ardent defenders of the expanded 24-team format could not make such claims for Euro 2016.

In France, innovation was on the back-burner as the most successful coaches did what they could with meagre resources and star players shattered from the gruelling treadmill of elite European club football.

New Chelsea manager Antonio Conte, who outed himself as an unexpected Allardyce admirer this week, led Italy to the quarter-finals at Euro 2016.

The former Juventus boss masterminded superb team performances to defeat much-fancied opponents in the form of Belgium and Spain and he spoke revealingly after the latter 2-0 victory in the last 16.

"We can't allow ourselves to simply be a group of players," he said. "There's no point in hiding the fact that it's not the rosiest period for Italy in terms of footballing talent so, given the fact that we can't fall back on a selection of good players, we need to be a team from every perspective."

Conte had a squad, about whose modest talents he was unflinchingly honest, that looked ready to run through walls for him as they deposed Spain. Later that day, England's muddled misfits appeared as if they would struggle to competently hold open a door for Roy Hodgson.

If Italy, as four-time world champions, were willing to swallow their pride and turn in selfless performances to make a nation proud, England, with their one major honour from half a century ago, should be eager to do the same.

Allardyce is not taking over a footballing superpower; he will manage a nation who last reached a semi-final 20 years ago and have won two knockout matches in the interim period. A well-drilled team facing this reality with eyes open is the requirement and one the new manager is as well-placed as anyone available to deliver.