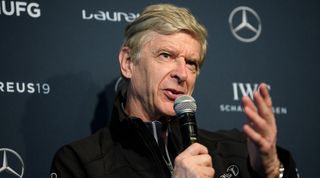 The Frenchman was replaced by Unai Emery at the Emirates last summer and explained that he felt “disconnected” from the Gunners before his departure.

But Wenger, who turns 70 next month, is keen to return to the game in a senior capacity, be it as a manager or intermediary.

"I still can't live with the fact that I'll never be on the bench again,” he told beIN Sports.

"I might go for an intermediate position. What I want for sure is to share what I know, what I’ve learned, as much as I can.

“I would like to experience one more time the intensity of a competition.”

Wenger admitted that he expected to be back in the game soon after leaving Arsenal, but he needed a period to recharge his batteries.

“I enjoyed taking a distance and had a reluctance to go back into the heat again,” he said.

The Frenchman also admitted that “it was difficult to say no to some people” after being presented with various opportunities over the last year, but refused to go into more detail.

“Other people have taken the job and I don’t want them to feel they have been a second choice,” he said.

“You have many candidates for positions sometimes and once a decision has been made you have to respect it.”

When asked about the biggest lesson he has learned during his time outside of the game, Wenger reflected on his time in north London.

He said: “When you have been in the game for such a long time, I would never have felt I could leave Arsenal without being disconnected from the club, but I had to reinvent a new life. I had to take a distance by being positive.

"Sometimes you could become a bit bitter because you don't have the same excitement anymore, and I'm very happy to have survived but in a very positive way because I'm conscious that 22 years is exceptional.

"I was very lucky to guide this club for 22 years - with a touch of class always. So overall, I must say that I'm happy to have disconnected.

"I managed to do that because I feel somewhere that I gave my heart and my brain as much as I could when I was there.

"And then you have to accept that. It's like educating children. You have to let them go their way and continue to be successful."