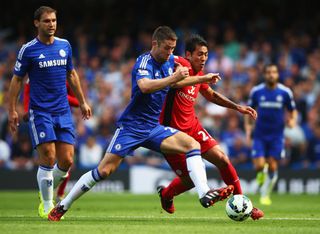 The west London club have won both their opening two top-flight fixtures of the campaign, beating newly promoted duo Burnley and Leicester City.

Chelsea finished third in the Premier League last season despite taking maximum points from their four fixtures against the two teams who ended above them - Manchester City and Liverpool.

Jose Mourinho's side were uncharacteristically wasteful in several so-called lesser games in 2013-14, with dropped points against teams from the lower reaches of the division costing them dear.

But Cahill feels that in beating Burnley 3-1 and Leicester 2-0 in the space of five days at the start of this term, Chelsea have shown a more clinical attitude as they look to win their first title since 2009-10.

"They were two tough games against teams that have just come up," the 27-year-old told the club's official website.

"We slipped up last season in games which people expected us to take points from but the Premier League isn't as easy as that - you have to fight every time you take to the field.

"We've added to our squad, we know where we slipped up last year, so the first two games have been very important for us. Other teams have strengthened so it's going to be very tough.

"We know the expectation level at the club, we always expect to be in and around there [the title race] but the Premier League us very difficult."