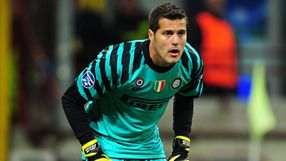 "Already tomorrow they will begin a course of physiotherapy," an Inter statement said on Saturday without saying whether they might return in time to face Harry Redknapp's side in Tuesday's crucial match.

The pair were substituted during Friday's 1-0 Serie A win at Genoa and were replaced by former Sampdoria keeper Luca Castellazzi and goalscorer Sulley Muntari - a former charge of Harry Redknapp at Portsmouth, who are both set to deputise again at White Hart Lane.

The European champions have had a string of muscle injuries this term with pundits questioning whether Rafael Benitez's training regime is to blame after the squad had a relatively clean bill of health under ex-coach Jose Mourinho last season.

Strikers Diego Milito and Goran Pandev were only fit enough for the bench in Genoa and are not certain to start at Tottenham while several other first teamers are carrying niggles.

Inter beat Spurs 4-3 in the last round of Group A fixtures, with Gareth Bale's late hattrick not enough to seal a point for Tottenham.