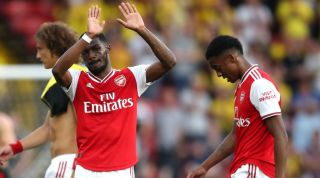 Unai Emery’s side surrendered a two-goal lead to draw 2-2 at Watford on Sunday, leaving the Gunners in seventh place after five rounds of action.

And former England international Bent, who represented Arsenal’s north London rivals Spurs from 2007-09, thinks the Emirates Stadium side won’t get anywhere until they plug the gaps at the back.

“They’re playing more like four individuals than they are as a collective unit,” he told Football Insider, of the Gunners' back four.

“They’re just not working in tandem, they’re all over the place. You’ve got some that are trying to play offsides, you’ve got ones that aren’t attacking crosses, one will try win the header, the other’s not covering.

“You can’t be exciting going forward and concede as many goals as they do because you’re going to get nowhere.

“They’re going to turn into Everton. What they’ve got over Everton is that they can score more goals than Everton so it gets them out of jail. They can’t be shipping goals left, right and centre.”