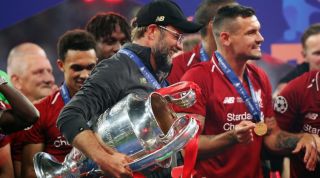 Tuesday night wasn't the best for Jurgen Klopp. The defence of his first Champions League title could have gone better than a 2-0 defeat to Napoli.

Although as his opposite number noted, it might not all be bad news: the last time Liverpool lost in Naples, they won the whole bloody thing.

You might have noticed we didn't give you the opposite number's name. That's because he is also an answer on this quiz! A-ha!

Jurgen Klopp you've already got – your first (and only) free answer here: this time we'd like you to name the last 20 coaches to have held Ol' Big Ears aloft.

This will take you back 30 years, to the days of the 'European Cup', no less. You've got five minutes to get it done, and then tell us your scores at @FourFourTwo before tagging some friends to test their knowledge. We'll retweet your efforts so long as you don't give any answers away.

QUIZ Can you name the 50 Real Madrid players with the most Champions League appearances?

TALENTSPOTTER Eric Garcia: who is the 18-year-old about to step in at centre-back for Manchester City?