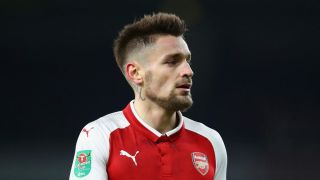 Mathieu Debuchy has joined Saint-Etienne until the end of the season after his contract was terminated by Arsenal.

The right-back joined the Gunners in 2014 but injuries were a contributing factor to him making only 13 Premier League appearances for the club.

The 32-year-old, who began his career and came to prominence at Lille, spent the second half of the 2015-16 season on loan at Bordeaux.

Debuchy made four appearances in the Europa League for Arsenal this season but did not feature in the Premier League.

He joins Yann M'Vila, Paul-Georges Ntep and Neven Subotic among the arrivals of a productive transfer window at Saint-Etienne.