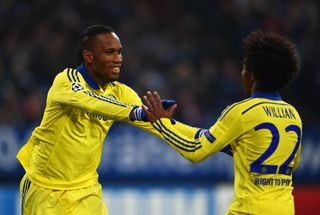 Jose Mourinho's side lead the Premier League by six points, having claimed 10 wins and two draws from 12 outings this season, and booked their place in the last 16 of the UEFA Champions League on Tuesday with an eye-catching 5-0 victory at Schalke.

The win in Gelsenkirchen left Mourinho purring over his team's performance and Drogba - who, like the manager, is in his second spell at Stamford Bridge - has also been impressed by Chelsea's attacking prowess.

However, the veteran Ivorian striker - who inspired Chelsea to Champions League glory in 2012 - knows results are key to ensuring a place in the history books.

"I think Chelsea can say we had great teams in terms of spirit, a machine, in terms of hard work and efficiency," Drogba is quoted as telling the English media.

"This one is efficient too, but with the attacking players, the passing rate and quality of passing is higher. We have more creative players, which makes it maybe better to look at.

"In both ways, the most important thing is to win titles, so this team will only be good if this team wins titles and big trophies. Then we will be able to compare it with previous ones."

The likes of Diego Costa, Eden Hazard and Cesc Fabregas have excelled for Chelsea this term.

Having come up against his fellow attacking players in training, Drogba does not envy the challenge facing opposition defences.

"I was a defender once and sometimes I try to face them in training," he added.

"After that, I have to go to the massage room and get some treatment because they're that good."

Drogba believes other teams may be eager to avoid Chelsea when the draw for the knockout stages of the Champions League is made.

"We are very happy to have qualified. We have one more game to play and we are going to wait for the draw and prepare for the second phase of the tournament," he said.

"I don't know if other teams will want to play us."