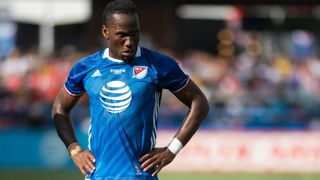 Didier Drogba insists it is not just luck that he continues to plague Arsenal after finding the net against the Premier League giants for the MLS All-Stars.

Former Chelsea forward Drogba scored on the stroke of half-time to equalise for the All Stars but it was not enough as Chuba Akpom made it 2-1 late in the game to seal an Arsenal victory on Thursday.

The goal was Drogba's 16th in as many appearances against Arsenal, having tormented Arsene Wenger's side throughout his time at Stamford Bridge.

Asked if he feels fortunate to constantly find the net against Arsenal, Drogba said: "I don't know, I don't know, I want to say that I'm lucky but when you score 16 goals against them I don't think it's luck no more."

However, Drogba was left disappointed with the result - despite it being only a friendly fixture.

"I want to help my team to win games. And I always say that the goal that I score and then we lose, for me that doesn't count," the Montreal Impact striker said.

"For me it's for fun because I scored against [former Chelsea, now Arsenal goalkeeper] Petr [Cech], but the result matters more than my goal or my own performance. It's a bit disappointing to have lost this game in the last minute.

"I hate losing. So for fun, I will have fun with Petr because I scored. But he already killed me and said 'This time I give you the goal'.

"But apart from that, no, the result I'm not happy with."

Drogba tested former Chelsea team-mate Cech early on and had another shot blocked before eventually scoring in the opening period at the Avaya Stadium in San Jose.

"He has always harmed us, and he continues. He's a winner and I think that he'll be like that until the end of his life," Wenger said about the 38-year-old.

"At half-time, I was thinking 'He's still haunting us, even in the United States!' Drogba is a typical poacher of a goal. He can do that in the box.

"When I see him in the box and fighting with young defenders I always think that now there is danger there because you know he will get the upper hand and score you a goal and that's what he did."