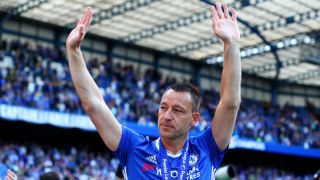 Former England manager Sven-Goran Eriksson does not believe John Terry will have any problems finding a new home as he prepares to leave Chelsea.

Terry, 36, said goodbye to Stamford Bridge on Sunday when Premier League champions Chelsea crushed relegated Sunderland 5-1 as the veteran captain was substituted to a standing ovation in the 26th minute – the number he wears for the club.

The defender's 22-year-association with Chelsea will officially come to an end following the FA Cup final against Arsenal this weekend having announced his intention to move on at season's end.

Eriksson – the man responsible for Terry's England debut – paid tribute to one of football's finest centre-backs, telling Omnisport: "It's sad. It's sad for Terry, the fans and for everybody who has been working with him for so long. But that's life in football. One day you have to change.

"I don't think he will have any problems finding a club.

"He is a real, proper defender. His technique is very good. I remember I had him in the national team and you are surprised when you start working with him, technically he is a very good player.

"His mentality of course, it's like a real defender. Extremely professional. He has all the qualities you are asking for in one of the best defenders you can find."

Bournemouth, Swansea City and West Brom have emerged as possible destinations for Terry, who has also been linked with a move to China and MLS.

Eriksson – now coaching Shenzhen FC in China's second division – said: "I would think he and his agent are open to anything.

"China, America or stay in England. I suppose he is open to all of these things."

Eriksson worked closely with Terry, handing the Englishman his international bow against Serbia and Montenegro in 2003.

Terry went on to become a mainstay in England's defence, earning 78 caps before retiring in 2012.

Reflecting on his time with the centre-back in the national team, Eriksson had nothing but praise, especially for his work ethic.

"You could understand [at the time] that this is a special player," the Swede added. "He was always a pleasure to work with. He was always the first to training and the last to leave many times. I had many players like that – Wayne Rooney and David Beckham as well.

"I can only take off my hat and say big, big congratulations to all he achieved so far with Chelsea and the national team."