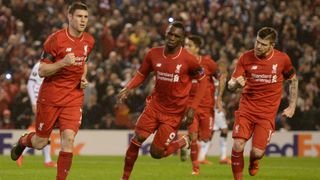 Liverpool, Tottenham, Villarreal and Schalke all booked their places in the Europa League round of 32, while Bordeaux and Celtic were among those to suffer elimination.

Jurgen Klopp's Liverpool fell behind in their Group B clash with Bordeaux when Henri Saivet converted an indirect free-kick awarded for time-wasting by Simon Mignolet.

However, Christian Benteke's fine strike in first-half stoppage time followed James Milner's penalty, booking their place in the knockout stages via a 2-1 victory and meaning they require just a point against Sion - who suffered a 2-0 defeat to Rubin - next time out to win the group.

Celtic got off to an excellent start when they went ahead at home to Ajax inside three minutes, but second-half goals from Arkadiusz Milik and substitute Vaclav Cerny sent them crashing out following a 2-1 loss.

Ajax were unable to close the gap on Fenerbahce, however, who overcame Group A leaders Molde 2-0.

Frank de Boer's Ajax must defeat Molde in their final outing to have any chance of advancing to the next stage.

Harry Kane scored the only goal of the game as Tottenham booked their place in the knockout stages with victory at Qarabag, but with Monaco going down 2-0 at home to Anderlecht all three sides remain capable of taking the final qualifying spot.

Villarreal took control of Group E with a 1-0 victory over Rapid Vienna, while Dinamo Minsk ended a run of four straight defeats with a 1-0 win against Viktoria Plzen.

Schalke and Sparta Prague secured progression with 1-0 wins over APOEL and Asteras Tripolis respectively, leaving top spot up for grabs when the German and Czech sides meet on matchday six.

Basel got the point they needed to cement first place in Group I, coming from two goals down to former coach Paulo Sousa's Fiorentina side to draw 2-2, while Lech Poznan and Belenenses are both in with a shot of displacing the Italian side in second after their goalless draw in Lisbon.

Krasnodar ensured it was they who would join Borussia Dortmund in the top two places of Group C, defeating the German side - who hit the woodwork three times - 1-0 courtesy of Pavel Mamaev's second-minute penalty and sending PAOK and Qabala packing.

Lazio confirmed themselves as group winners by overcoming Dnipro 3-1 in a result that meant Saint-Etienne's 1-1 draw away at Rosenberg was enough for them to make sure of second position.

Legia Warsaw kept their hopes of making the knockout stages alive with Aleksandar Prijovic's looping header earning a 1-0 victory over Midtjylland, but Club Brugge failed to take advantage as they lost to Napoli – who have taken maximum points from their five games – by the same score.

Braga tightened their grip on pole position by defeating Slovan Liberec 2-1, with the Czech side dropping down to third as a result of Marseille's 2-1 win at home to Groningen - Michy Batshuayi with a late winner.

Lokomotiv Moscow failed to get the win they needed in order to qualify as they suffered a 4-2 defeat to an impressive Sporting CP, but Skenderbeu Korce's exit was confirmed with a 2-0 loss at new leaders Besiktas.

Partizan's 2-1 win at AZ Alkmaar keeps them in the hunt and eliminates the Dutch side, but Athletic Bilbao secured top spot as two goals in three minutes from Aritz Aduriz saw them come from behind to beat Augsburg 3-2 in Bavaria.