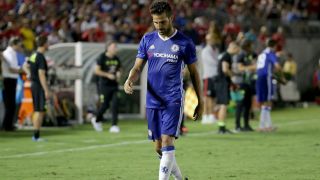 Cesc Fabregas has apologised for the dangerous tackle on Ragnar Klavan that earned him a red card in Chelsea's International Champions Cup clash with Liverpool on Wednesday.

The Spain international was sent off after 70 minutes at the Rose Bowl after making a lunging challenge on the Estonia captain as the ball broke loose.

Chelsea boss Antonio Conte offered his own apology after the match, saying fatigue had caused Fabregas to attempt to win possession too late.

The midfielder has now tweeted to say there was nothing malicious behind the challenge, but that he was sorry nonetheless.

I'm very sorry for my late challenge on Ragnar Klavan. There was no malicious intent and very relieved that he is ok. (2/2)July 28, 2016

"Great team performance last night and important to get back to winning ways. I'm feeling very good and strong," he wrote, before adding his apology.

"I'm very sorry for my late challenge on Ragnar Klavan. There was no malicious intent and [I'm] very relieved that he is ok."

Chelsea claimed a 1-0 victory thanks to a header from Gary Cahill after just 10 minutes.