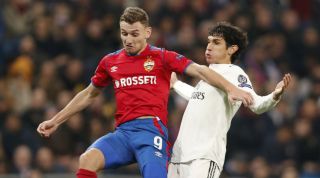 Chalov was the top scorer in the Russian Premier League last season with 15 goals, helping his side finish fourth and qualify for the Europa League.

The 21-year-old scored against Arsenal when they met in the same competition in 2017/18, netting a consolation in his side's comprehensive aggregate quarter-final defeat.

He also scored on a much happier occasion last season when CSKA trounced Real Madrid 3-0 at the Bernabeu in the Champions League group stage.

According to Sky Sports News, Monaco, Sevilla and Arsenal make up a trio of clubs chasing Chalov's signature.

It's unclear how much the Russian side would want for Chalov, but the two-cap youngster still has three years left on his contract.

Arsenal are losing Danny Welbeck at the end of the month when his contract expires, and will likely be on the lookout for another option up front.

Quiz! Can you name the top 51 Dutch appearance-makers in Premier League history?