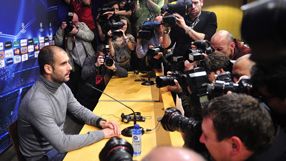 The La Liga leaders need to reverse a 2-1 deficit from last month's first leg in London if they are to eliminate the PremierLeague club for a second straight season and Guardiola has faith his side will be true to their attacking instincts in a match featuring two of the most admired sides in the competition.

LIVE COVERAGE Follow it with the FourFourTwo team as it happens

Arsenal should have their captain and former Barca youth player Cesc Fabregas back from injury and pulling the strings in midfield, while striker Robin van Persie may make a surprisingly swift return after hurting his knee last week.

"When you play these kind of matches there is also stress and pressure in the minds of the players," former Spain and Barca midfielder Guardiola told a news conference on Monday.

"The focus on the game is the most important thing. The rest is not important," he added.

"There are many details to remember to beat Arsenal and we always focus on that. We don't have players who try to find different ways to win the games. The football is our power."

In Tuesday's other last-16, second leg, Serie A side AS Roma bid to overturn last month's 3-2 defeat at home to Ukraine's Shakhtar Donetsk, who are seeking a place in the quarter-finals for the first time.

"Our opponents naturally want revenge, but Shakhtar have enough experience to get a proper result," coach Mircea Lucescu said on Monday.