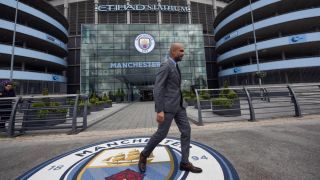 New Manchester City manager Pep Guardiola has told his club's fans not to expect miracles from him as he embarks on his "biggest challenge" in football management.

The former Barcelona and Bayern Munich boss is no stranger to winning and while he has done so with considerable style - often leaving English teams in his wake in the Champions League - he said he was not arriving in England with the aim of changing the way the game is played there.

"To come to the country who created football and believe you have to change something would be a little bit presumptuous,” said Guardiola.

"I'm not good enough to change everything. It could be the biggest [challenge] because City haven't won as many titles as Barca or Bayern. To change the mentality of a club of 120 years would be presumptuous.

"I trust a lot in myself, I think I'm able to do the job, but I didn’t come here to think I can change the mentality or the culture of England.

"Spain is the way it is for the weather, the history, many things. Germany is completely different as well."

And Guardiola said he will have to adapt his approach to suit English football and the players available to him, just as he did when he started at Bayern after a hugely successful spell at Barcelona,

"When I arrived at Bayern Munich I had an idea. What I felt completely was the way Barcelona played and I said I wanted to try to do what I feel," he said.

"We depend upon the players and they depend on us as well. You've got to adapt to the country, to get to know the players."

Not that he will have a lot of time to adapt, as he himself admitted.

"People don't expect to see in January and February how good we are, they expect in the first friendly against Bayern to see how good Pep is," Guardiola continued.

"I need time, but I know I don't have time. It was the same at Barcelona, the same in Munich, so that's the expectation.

"I was lucky to train Barcelona and Bayern Munich with these amazing players and we won a lot of titles in a short time. The expectations now are the same here and we will try."