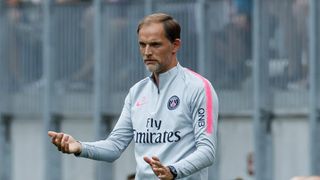 Unai Emery defeated his former side in Singapore in convincing fashion, as he named a strong team which included the likes of Mesut Ozil as captain, Henrikh Mkhitaryan and Pierre-Emerick Aubameyang.

Ozil got the scoring started, marking his return to action following a difficult couple of months which culminated in his retirement from international football last Sunday.

Alexandre Lacazette added a brace, before Rob Holding and Eddie Nketiah completed the rout late on.

By contrast, PSG's only senior players to start were Gianluigi Buffon, Lassana Diarra and Adrien Rabiot, and Tuchel essentially wrote his team's chances off as soon as the line-ups were announced.

"I take it on my shoulder," Tuchel told reporters. "I saw some good passing play with the ball against Bayern [Munich] and I thought we are ready.

"It was also about the quality of the other team who are a Premier League team and can immediately play any competition.

"Their quality on the ball was too high. The players did their best and I cannot blame them.

"Nobody likes to lose, but when you look at the sheet before the game, you know there is almost no chance to compete at this level."

Most of PSG's senior squad remains absent due to their World Cup exploits, whereas Arsenal were nearly at full strength and a prickly Tuchel wasted no time in pointing to that disparity.

When asked if PSG were at a disadvantage, Tuchel said: "Yes, clearly. I think they are playing in the Europa League this season, right?

"We saw this with Chelsea; they had no European games three years ago and became champions. It's a big advantage in the pre-season.

"It gets complicated for teams who have many players at the World Cup. I think managing is almost not managing, at times. It's about getting the players to rest.

"Our players, we want them back as we have a new team, new coaching staff and we want everyone to adapt quickly.

"However, the players are missing and the league starts early. This kind of a situation we almost cannot handle, but we have to handle.

"There's no time for complaints, but it was a big advantage for Arsenal, as they have so many new players here in Asia and have them in the squad from the start."