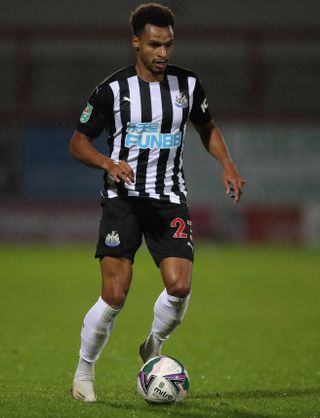 Jacob Murphy believes he has given Steve Bruce “food for thought” after his starring role in Newcastle’s biggest win of the 21st century.

Murphy was Newcastle’s star man at the empty Mazuma Stadium, putting in a fine display after being left out of the first two Premier League matchday squads and only brought off the bench in the previous round.

The winger spent last season on loan at Sheffield Wednesday and speculation was building about another exit, but Bruce ruled out letting him leave saying he could “not after a performance like that”.

Put to Murphy that the Newcastle boss had picked him as man of the match, he smiled and said: “Hearing that now has given me a lot of confidence.

“We’ve had several conversations and he keeps telling me ‘keep patient, keep working hard’, which I have been doing.

“I knew when I get an opportunity I have got to perform and I felt I did that today.

“I just want to keep getting opportunities to show what I can do for this club.

“I feel like I have taken (my chance) but I have got to keep going. That’s just one game.

“I am happy with how I played and I want to kick on from here.”

Murphy feels more confident and believes his game has developed, with the former Norwich winger also showing no little patience as others got opportunities.

“There’s always going to be setbacks and it’s how you deal with it,” he said.

“I have stayed grounded, I’ve kept working hard on the training pitch and then thankfully tonight the manager has given me an opportunity and I think have given him food for thought.”

Asked about the prospect of forcing his way into the thinking for Sunday’s Premier League trip to Tottenham, Murphy told NUFC TV: “Yeah, that was my aim of today, that was the overall outcome.

“We’ll wait and see what happens, but that’s a decision that the manager has to make and all I can do is put in performances like that to give him a headache.”

While Newcastle head to one of the most modern stadiums in the world this weekend, Morecambe return to League Two action at Southend looking for a response of their own.

Last weekend’s 5-0 home loss to Cambridge was not as one-sided as the scoreline suggested, but Wednesday’s 7-0 defeat certainly was and Shrimps boss Derek Adams wants improvements.

“The way that Newcastle played, I think that any team in League One or League Two would have found it difficult tonight,” the Morecambe manager told the PA news agency after playing for an hour with 10 men.

“I thought that in the second half we defended a lot better from the point of view that we didn’t allow a great deal of space. But, listen, they’re a very good side.

“Southend came down from League One last year. A decent outfit and they will have seen the result tonight and the result on Saturday, so we’re well aware of the improvement we have to do.

“We’ve got to remember that we won away to Grimsby, we won away to Cheltenham already this season and at home to Oldham, so we have to be careful we don’t be too negative in ourselves.”