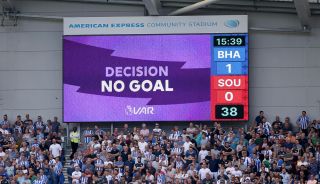 The Video Assistant Referee technology was introduced to England’s top division for the first time in August, and has dominated the headlines since.

“It hasn’t changed (our coverage) too much, everybody just finds it frustrating,” Stelling told PA. “It was meant to improve the game and one thing is for sure, as of now, it has not improved the game.

“Sometimes you groan and think ‘we don’t want to talk about VAR again, it’s boring.’

“You want to talk about something different.”

High-profile VAR incidents so far this season include Gabriel Jesus being denied a winning goal for Manchester City against Tottenham due to a handball offence in the build-up, while match-going fans have been frustrated by the number of interventions.

“One of our fears was that the games would be finishing at all sorts of ridiculous times, and that hasn’t happened,” said Stelling.

“Matt Le Tissier is in favour of it, but I can’t speak for the others (on Soccer Saturday). We’ve got very mixed views about it indeed, but I think that’s reflective of people in football up and down the country.

“Instead of debating controversial decisions, that debate turns to discussing how VAR has got it so awfully wrong, or in some cases, how VAR has been terrific.”

On Sunday Stelling completed the last of his four marathons in four days for Prostate Cancer UK, raising more than £200,000 for the charity in walking the 26-mile distance in Glasgow, Belfast, Cardiff and London.

More than 500 walkers joined him during the effort, including former footballers and people with experience of the disease.

“I was walking with a guy who had had his prostate removed 26 days ago so it puts the aches and pains into perspective,” said Stelling. “you can’t moan too much.

“Anything that can help raise the profile and make men aware of what a danger it (prostate cancer) is to them and what they’ve got to look for has got to be a help. That was the initial aim, increasing awareness rather than raising money.”

To donate, visit www.justgiving.com/campaign/jeffsmarchformen2019 or search Jeff Stelling’s March for Men 2019 on Just Giving. For more information, go to prostatecanceruk.org/jeffsmarch.