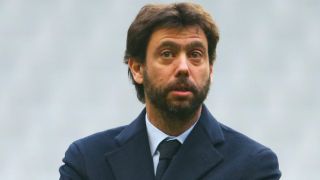 Juventus will appeal against a €300,000 fine and a one-year ban issued to president Andrea Agnelli by the Italian Football Federation for his role in selling tickets to fans allegedly linked with organised crime.

The Serie A champions were hit with the financial penalty, while Agnelli and three other officials were given suspensions and individual fines. They have always denied any wrongdoing.

Several prominent figures at Juve were called to testify at a parliamentary Anti-Mafia Commission amid claims of a connection between club officials, fanatical 'ultra' supporter groups and suspected organised crime bosses regarding the distribution of tickets.

Juve issued a statement after Monday's verdict, which read: "Juventus Football Club announces that it will lodge an appeal to the FIGC Court of Appeal in the firm belief that the club is in the right, a fact which is yet to be properly acknowledged.

"Despite the lengthy bans inflicted on the president and the other individuals involved, the club is nonetheless satisfied that today's ruling, 'after a careful examination of the evidence obtained' (page 11 of the ruling), completely rules out all possible links with organised crime.

"Juventus Football Club has faith in the sporting justice system and would like to once again stress that the club has always cooperated fully with the authorities in the interests of safety and public order."

The FIGC prosecutor, Giuseppe Pecoraro, is believed to have asked for a two-and-a-half-year suspension for Agnelli, a fine and for Juve to play two matches behind closed doors.

Speaking before Juve's statement, he suggested he will lodge an appeal in order to bring about more severe sanctions.

"I am partially satisfied because we managed to prove everyone's guilt, but the facts are so serious that I think they should be punished more," he told ANSA.

"I think the judgment of another court would be useful, taking into account that the resources coming from the ticket touting went to a criminal organisation, and that is very serious."

Speaking in March, Agnelli insisted the fans he met with had never engaged in any criminal activity and that there was nothing clandestine about his behaviour.

"I never met with any Mafia bosses," he said. "I want to remind everyone that at the time these ultras were, and indeed still are, free of any criminal record.

"I have met with ultras from various different groups and always in the clear light of day. This is normal for a president of a football club.

"Are some ultras members not exactly saints? I agree, but they had a clean criminal record and no restriction on attending games."

The news comes less than a month after Agnelli was appointed the new chairman of the European Club Association (ECA), succeeding Karl-Heinz Rummenigge.

It is unclear how his role at the ECA will be affected by his suspension, which covers official duties relating to Juve.