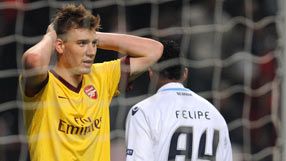 Since returning from a long-term groin injury, the Danish international has failed to hold down a regular starting berth under Arsene Wenger.

And he recently revealed that he would consider leaving the Gunners in order to play regular football if the situation does not change.

GEAR:Up to £10 off all Premier League kits with Kitbag. Free delivery on orders over £40

However, after watching Arsenal’s 2-0 loss against Portuguese outfit Braga in the Champions League, Keown suggested that Bendtner should concentrate on improving his performances before he considers himself a regular fixture in the Arsenal line-up.

“There was laziness all over the pitch for Arsenal,” 44-year-old Keown said in the Daily Mail.

“Bendtner has been talking himself up a lot in the papers, but his work rate is not good enough.

“There were times against Braga when Theo Walcott put in decent crosses and Bendtner was not willing to try to get on the end of them. He wasn't busting a gut like he should have been.”