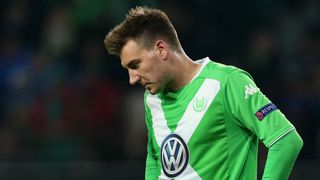 Wolfsburg have released Nicklas Bendtner on a free transfer with immediate effect.

The Denmark international's contract with the Bundesliga outfit ran until June 2017, but Wolfsburg have opted to prematurely end his deal.

Bendtner had not trained with the first team since the end of March, with chief executive Klaus Allofs describing the former Arsenal striker as "a menace to the team" due to his lack of professionalism.

"Nicklas and Wolfsburg had high expectations when he joined us a little under two years ago, but both parties have to admitted things did not pan out as expected," Allofs explained.

"Continuing our collaboration would not have made any sense for either party.

"That's why we think cancelling Nicklas' contract is the best step for all involved.

"We would like to wish him all the best in the rest of his career."

Bendtner joined Wolfsburg on a free transfer in 2014 and scored nine goals in 47 appearances in all competitions since.