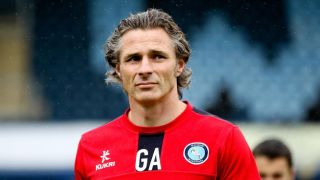 Gareth Ainsworth's Wycombe occupy the final automatic promotion spot, but back-to-back defeats at the start of April have left them just four points clear of fourth-placed Bury - who have the added bonus of a game in hand.

Cheltenham are bottom of the table and three points off safety. The appointment of Gary Johnson has done little to change their fortunes, with the former Yeovil boss losing both of his matches in charge to date.

Prior to their recent dip in form, Wycombe had gone unbeaten in eight matches, with manager Ainsworth winning the division's Manager of the Month award for March.

He wants a quick return to form at Adams Park, telling the club's official website: "We had an excellent run of form during the month of March and hopefully we can keep the same level of performances and results for the rest of the season to help us achieve our aim of winning promotion."

Southend United, in fifth, still harbour hopes of automatic promotion and also face a side desperate to stay in the league in Tranmere Rovers, who are a point adrift of safety.

Leaders Burton Albion are close to confirming their promotion to League One, with an 11-point lead over Bury, but Jimmy Floyd Hasselbaink's side face a tricky trip to Kenilworth Road against a Luton Town side that ended a seven-match losing streak at Tranmere last week to reinvigorate their play-off hopes.

Shrewsbury Town are also on the cusp of promotion in second and welcome play-off hopefuls Exeter City to New Meadow.

York City, unbeaten in four, can take a huge step towards assuring safety when they host 22nd-placed Hartlepool United, whose recent resurgence ended with a 1-0 loss to Southend last time out.

Carlisle United remain firmly in the mire and seek a much-needed three points at home to Dagenham and Redbridge.

More twists are in store in the play-off race as Bury travel to seventh-placed Newport County, with Plymouth Argyle attempting to leapfrog the Welsh team by beating strugglers Mansfield Town at Home Park.

Stevenage attempt to firm their play-off chances at home to Northampton Town.

Cambridge United all but staved off the threat of relegation by beating Northampton last time out and Richard Money's men go for back-to-back wins against Accrington Stanley, while Morecambe and AFC Wimbledon host Portsmouth and Oxford United respectively.