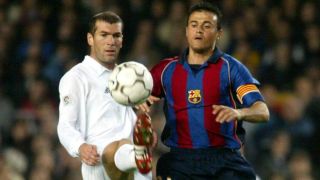 Barcelona coach Luis Enrique insists he does not remember any on-field clashes with Zinedine Zidane and has respect for the new Real Madrid boss.

Following Zidane's announcement as successor to the sacked Rafael Benitez on Monday, footage of the Frenchman and Luis Enrique having a fracas during a Clasico meeting in 2003 resurfaced.

Luis Enrique grabs Zidane's throat, while the Frenchman has the former Barca captain by the face.

However, Luis Enrique said he cannot recall the incident in question.

"I don't have an opinion about him as a coach. I haven't had the time to go over it," he said.

"Everyone defends their own team and I don't have a good or bad memory of anything.

"I haven't seen the images and I don't remember any exchange with Zidane, but for sure we were defending our teams.

"I respect him as a colleague."

Luis Enrique and Zidane will meet for the first time as managers on April 3.