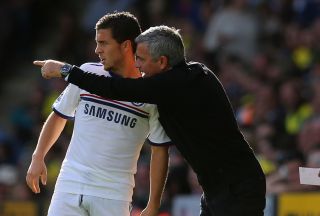 Mourinho's return to Stamford Bridge initially got off to a stuttering start, but Chelsea have gained fluency in recent weeks, winning four of their last five Premier League games to leave them third in the table, just two points off table-toppers Arsenal.

Eden Hazard, Oscar and Willian have excelled as a creative triumvirate in recent weeks, leaving two-time Chelsea player of the year Juan Mata scrapping for minutes.

Mourinho has previously claimed the Spaniard needs to be able to work more for the team in order to get a run in his XI, although Mikel believes others have shown a greater aptitude for it.

"That's the mentality he wants installed in this team and slowly but surely the likes of Eden, Oscar and Willian are beginning to do that.

"What the Premier League and Champions League means to this club. If you don't play for Chelsea, you don't know what these trophies mean to us.

"It's not a team where if you come second, third or fourth, it doesn't matter. No - every year you have to win something and this is the pressure.

"Now they're here, they have to feel the pressure and they are feeling it right now. That's why we just want to keep doing well and now they're starting to understand that we don't want to get beaten."