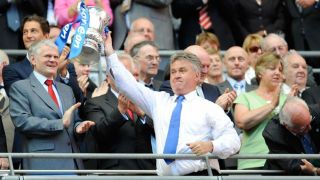 Ahead of Sunday's fourth-round clash with MK Dons, interim Chelsea manager Guus Hiddink sees the FA Cup as a way of salvaging a hugely underwhelming campaign for the Premier League champions.

Hiddink - who lifted the FA Cup during his previous interim stint at Stamford Bridge in 2009 - takes his improving Chelsea side to Milton Keynes this weekend boasting an unbeaten record since succeeding Jose Mourinho in December.

That eight-match run includes a 2-0 third-round victory against League One Scunthorpe United, with Karl Robinson's Championship strugglers next to try and cause an upset.

Despite a gradual improvement, Chelsea sit 13th in the Premier League, leaving the FA Cup and Champions League as their only hopes of silverware this term.

Asked whether the FA Cup alone would represent a successful season, Hiddink said: "I think so. When you look at the table around Christmas, the team were one point off the relegation zone.

"Going on the road to the FA Cup, it would be a huge achievement because the FA Cup is not an under-valued cup, neither in England nor around the world. It would be an achievement."

Hiddink will once again be without Falcao (muscle) and Loic Remy (calf), while in-form striker Diego Costa is expected to shake off a knee injury picked up in Sunday's 1-0 win at Arsenal.

Gary Cahill could be handed a rare appearance, having struggled for match action of late, and Hiddink added:  "We have a lot of games coming, in the FA Cup, the league and Champions League.

"So we have to think very cleverly about how to get and keep everyone fit. That is important but the FA Cup is important for us and at the moment we don't think about Wednesday's match at Watford."

A makeshift Chelsea side will likely have too much for Robinson's men, who booked their place in the fourth round with a 3-0 replay win over Northampton Town before going down 3-1 to rock-bottom Bolton Wanderers at the weekend.

"Chelsea still have some of the best players in the world, and we know they want to come here and play the strongest team they can,"  said Robinson, who will be without right-back George Baldock who is ineligible after being recalled from his loan at Oxford United on Thursday.

"Their team can beat anyone in the world. On the day, [our] players will have to perform. All of the preparation will mean nothing if they freeze on the day – we want to perform and try to get the result."