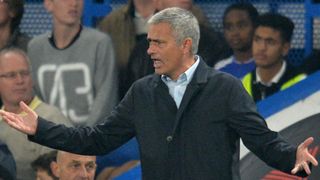 Chelsea manager Jose Mourinho has been charged with misconduct by the Football Association in relation to comments he made after Saturday's 3-1 Premier League defeat to Southampton.

Mourinho accused referees of being "afraid to give decisions to Chelsea" in an extraordinary post-match rant as the pressure on his shoulders increased amid an abysmal start to the club's title defence.

The Portuguese's frustration primarily related to referee Robert Madley’s decision to book Radamel Falcao for simulation when he went to ground under a challenge from Southampton goalkeeper Maarten Stekelenburg in the penalty area.

Southampton had a 2-1 lead at that stage and Mourinho was apparently aware that his comments would land him in hot water with the authorities.

"If the FA wants to punish me they can punish me," he said. "They don't punish other managers, but that would not be a problem for me."

A statement released on the FA's website on Monday read: "Jose Mourinho has been charged for misconduct in relation to media comments he made following Chelsea's game against Southampton on Saturday 3 October 2015.

"It is alleged his remarks constitute improper conduct in that they allege and/or imply bias on the part of a match official or match officials and/or bring the game into disrepute.

The news came on the same day that Mourinho was given the backing of the Chelsea board, with the champions sitting 16th in the table having already lost more top-flight games this season than they did in the whole of the previous campaign.