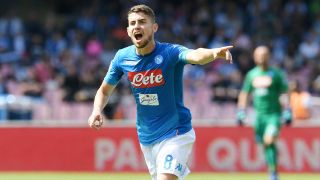 The Italy international's agent said this week that City had submitted an offer to the Serie A runners-up, with the Premier League champions apparently keen to conclude a deal promptly.

However, De Laurentiis claims he has turned down a sizeable offer for the 26-year-old, suggesting City will have to return with an increased bid.

"I've refused €45million plus a €5million bonus from City for Jorginho," he told Corriere dello Sport.

The 25-year-old forward, who has also been linked with AC Milan and West Ham, will reportedly cost €25m if the deal goes through.

10 - Simone Verdi is the only Italian player to have scored at least 10 goals and provided at least 10 assists across the top-5 European leagues this season. Multitasking. 16 May 2018

When asked about Verdi, De Laurentiis said Napoli sporting director Cristiano Giuntoli "did everything yesterday [Friday]" to finalise terms with the player's agent.

De Laurentiis hopes to make further additions to the squad before Carlo Ancelotti takes charge of his first match since being appointed head coach.

"From July 10 to July 31, Carlo will be able to assess the entire squad and make decisions," he said. "On August 4, we'll be in Dublin with Liverpool, and we'll see his first Napoli team.

"He wants to keep 80 per cent of the current group. He thinks it's excellent. Our aims are a goalkeeper, a full-back, a midfielder and a winger."

However, the 69-year-old claimed he would not stand in the way of Marek Hamsik if the midfielder accepts an offer from the Chinese Super League.

"If Hamsik wants to go to China, we won't stop him, but how much will they give?" he said.

De Laurentiis had warned this week that he would demand an appropriate fee for Hamsik, who is reportedly wanted by Shandong Luneng.