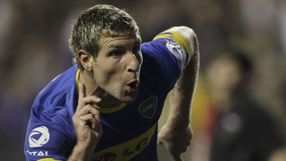 Boca were under caretaker Roberto Pompeii after coach Claudio Borghi quit on Wednesday in the wake of Boca's 1-0 defeat by River Plate in their "superclasico" derby at the Monumental.

The 37-year-old Palermo, Boca's all-time record scorer, tapped in a loose ball in a goalmouth melee 15 minutes from time for his seventh of the season.

The victory was Boca's first in the league since they beat Huracan 2-0 last month. They had also failed to score in the three games since.

It lifted Boca into 10th place with 20 points, 13 behind leaders Estudiantes, who beat Huracan 2-0 at home on Saturday.

Velez Sarsfield, who had been equal top, fell two points behind in second place after Gimnasia held them 0-0 to give their La Plata arch-rivals Estudiantes a helping hand.

Arsenal remained third eight points behind going into the last four matches of the Apertura championship.

River Plate failed to build on their confidence boosting win over Boca when they were held in a poor 0-0 draw at San Lorenzo.