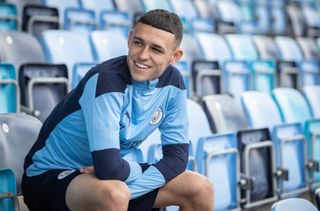 Phil Foden links up with England brimming with confidence after an impressive end to the season with Manchester City.

The 20-year-old playmaker has picked up two Premier League titles, an FA Cup and three EFL Cup winners’ medals since starring in the Young Lions’ superb Under-17 World Cup triumph in 2017.

Foden won the Golden Ball and BBC Young Sports Personality of the Year awards for those stunning displays in India, fuelling hype about a player that Pep Guardiola has praised to the hilt.

An honour to be called up! Can’t wait to pull that @England shirt on!! pic.twitter.com/PFtwdemBZS— Phil Foden (@PhilFoden) August 25, 2020

The City boss knows a thing or two about talented players and the 20-year-old’s impressive, extended run in the team following lockdown has now led to a maiden senior call-up.

“I played at many levels for England, probably every age group to tell you the truth,” Foden said. “To get the senior call-up now is massive for me and my family.

“But also there’s a few new lads as well, it’s their first time here, so I’m really proud to share that with them and just to see how happy they are to be here as well as me.

“I’m just enjoying it, I’m just trying to take in what Gareth is saying, trying to learn fast and get with the speed of the team.

“I’m only 20 years old. A lot of people have been pushing it, to play in the senior team much earlier, but I haven’t played a lot of games at Man City.

“Recently I’ve been playing a lot more and doing well, so I’ve had to work hard for the opportunity and now I’ve got it I’m just trying to give it the best I can do and just enjoy it, really. That’s what I’m going to try and do.”

It is not just the minutes Foden has been getting under his belt but the trust of representing City in big games, including starting last month’s Champions League last-16 second leg win against Real Madrid.

Asked what kind of impact such occasions and Guardiola’s faith have on his belief levels, he said: “Massive. I played in some massive games this year, like cup finals and big Champions League games, and they’re the games that everyone wants to play in.

“Sometimes it is difficult for a young player to play in those games but I think he has been patient with me and played me at the right times. Now I’m learning a lot and I feel ready to go.”

Foden could scarcely wish for a better teacher than Guardiola, nor could he be stepping into much bigger shoes than those of club great David Silva, recently departed for Real Sociedad.

City are to build a statue of the 34-year-old after his superb, medal-laden stint at the Etihad Stadium, where he has not only won trophies aplenty but helped prepare the next generation.

“Just what he sees,” Foden said of what he has learned from Silva. “He sees the game so differently to other players.

“How he moves into space in tight areas, how he receives the ball and never loses the ball as well. All these things. I’ve learned so much from him.”

Foden grew up dreaming of playing for City, just as he used to visualise himself wearing the Three Lions on his chest – an ambition he can now fulfil thanks to Southgate’s trust in youth.

But the 20-year-old is aware that there are improvements to be made across the board, even if team-mate Kyle Walker says he is the best young player he has ever seen.

“It puts a smile on my face straightaway,” Foden said when that statement was put to him. “I’m just happy that he said that, really.

“He’s worked with some great players, so for him to say that is a big statement.

“I still have a lot to work on and improve, so for him to say that makes me happy. But I still know what I need to do to get better. All the game, to be honest. Probably defending off the ball, learning new positions.

“I played a lot of new positions this year, so playing more positions and learning them. I feel like the whole part of the game I need to improve.”