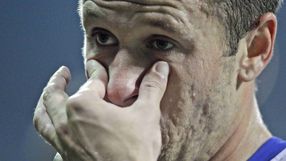 The league said in a statement on Tuesday that Pozzi had been given a one-game ban as part of a crackdown on players who blaspheme.

The suspension means Samp will only have Giampaolo Pazzini available as a recognised striker for Sunday's home game against Catania if the club continue to leave Italy forward Cassano out of the first-team squad.

Cassano has apologised for insulting club president Riccardo Garrone last week but was dropped for Sunday's 1-0 win at Cesena and media reports say his Samp career could be over with Inter Milan, Juventus and Palermo among those linked with a bid.