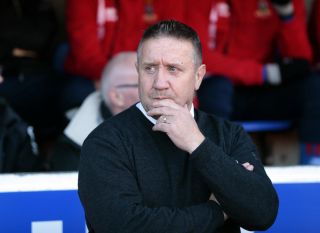 Robertson was sent to the stands at half-time of the 3-0 defeat at Tannadice after being accused of kicking a water bottle at Lowe in the wake of a controversial penalty award.

With Inverness trailing 1-0 on aggregate and creating decent chances, Brad McKay was penalised by referee Kevin Clancy after blocking Peter Pawlett’s strike with his foot and seeing it spin up and hit his arm.

Robertson, who felt his team had Liam Polworth wrongly sent off in the first leg, said: “We were unlucky not to be ahead and then the match is taken out our hands by a shocking decision. It’s right on half-time and it knocked the wind out of our sails.

“We’re told in all the referee seminars that if the ball is deflected on to the player’s arm it is not a penalty. I have 40 or 50 texts saying it’s not a penalty and the one man who needs to get it right has got it horribly wrong.

“And on top of that he is backed up by an incredibly obnoxious and arrogant fourth official.

“After the goal there was a water bottle lying there, I flicked it about a foot in the air and it clipped the back of the fourth official’s calf, which was translated into me losing the plot, getting irate and smashing a water bottle at him.

“It’s the biggest lie ever and I’m prepared to take this all the way. It’s a nonsense. To be sent to the stand for that is an absolute joke.”

The pair clashed again after full-time when Robertson went down to the edge of the pitch to shake hands and was told to wait in the tunnel.

“All I was doing was congratulating Kevin Clancy and the other official on their game and waiting to congratulate Robbie Neilson and his players and wish them all the best,” Robertson said. “And again, his arrogance, he comes across and asks me to leave the pitch.

“He said he was going to report me again. That’s the arrogance of him. This guy is coming up to rub salt in the wounds.

“They can ban me for as long as they want, I really don’t care, but I’m going to take this all the way.

“I’ve been irate before and done some daft things – I kicked Csaba Laszlo for goodness’ sake. But all I have done is flick a water bottle and it clipped him. I’m sure he will be in hospital tonight getting his leg amputated the way he reacted. It’s an absolute nonsense.”

United booked a final against Hamilton or St Mirren, with the first leg at Tannadice on Thursday.

Manager Neilson said: “The mood is very good and the mood in the stadium was very good but in my opinion we are not even halfway there.

“We went into this game as favourites and we go into the next game as underdogs, we will be up against a team who have been playing against better teams than we have week in, week out.”