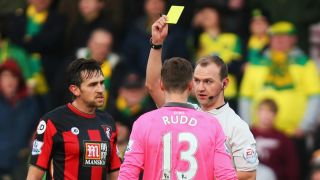 Goalkeeper Declan Rudd should have been sent off for upending Benik Afobe outside the penalty area in the first half of AFC Bournemouth's 3-0 home win over Norwich City, according to Eddie Howe.

In addition to his second-half goal, his first for the club following his January move from Wolves, Afobe was also involved in a highly contentious moment just before the break at the Vitality Stadium.

Latching on to a Harry Arter throughball, the former Arsenal forward was brought down by Rudd, who was booked by referee Robert Madley.

Madley, though, got it wrong in the eyes of Bournemouth boss Howe.

"In my opinion, he should have got their goalkeeper sent off," Howe told Sky Sports.

"I felt that it was a red card for the high foot. I thought it was a dangerous tackle and Benik could have picked up a serious injury there.

"He has picked up a knock, but fortunately I don't think it's too bad."

Howe said: "It was one of our better performances.

"I was really pleased with the players and I thought we were excellent from start to finish.

"We scored some really good goals and it was a very assured display."

Howe was especially pleased to see Afobe open his account for the club in what was his second appearance.

"I thought Benik played very well again, as he did on Tuesday against West Ham," he said.

"He worked incredibly hard, held the ball up very well to give us a platform to build our attacks from and looked razor sharp.

"And he capped it off with a really good finish for the goal."