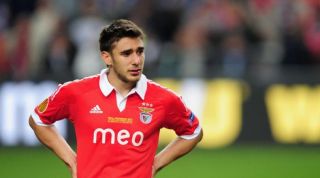 Despite finding the net with a well-taken second-half strike, the 24-year old was powerless to prevent his side slumping to a 3-1 defeat at the hands of a dominant Bayer Leverkusen at the BayArena on Wednesday.

Goals from Stefan Kiessling, Son Heung-min and Hakan Calhanoglu were enough to condemn Benfica to their second consecutive Champions League defeat, following a 2-0 opening loss at home to Zenit.

The result leaves Benfica rooted to the bottom of Group C, yet Salvio retains a belief that they can turn things around, despite falling short of expectations against Leverkusen.

He told UEFA.com: "We didn't start well, against a team that is strong in the midfield. The opponent was better and we have to accept it.

"There are four games left and Benfica always play to win. If there is a chance, we'll fight until the end for the qualification."

Benfica will need to produce something special if they are to get anything from a tricky trip to Monaco, who boast four points from two matches, on October 22.