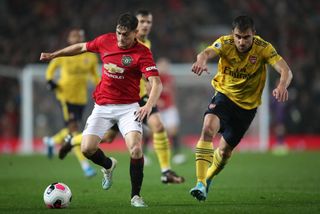 Sokratis Papastathopoulos believes Arsenal can take confidence from the strength they showed to come away from Old Trafford with a point on Monday night.

The Gunners have not won a Premier League match at Old Trafford since 2006 and, although that sequence continued, Arsenal fought back from a goal down to claim a 1-1 draw, with Pierre-Emerick Aubameyang’s equaliser being awarded by VAR.

Sokratis said: “It will give us a lot of confidence. We are a big team and play every game to win but some games you have to know also what you have to do better and when is your strong moment.

Proud of the team for showing great spirit to come back 💪🏼 @Arsenal#Sokrati5#MUNARSpic.twitter.com/89beZcm6jO— Sokratis Papastathopoulos (@SokratisPapa5) October 1, 2019

“We had the chance to win, we didn’t win but we take a point and it gives us confidence and we go to the next game.”

The game showcased the current weaknesses in both teams but it was at least a better defensive display from Arsenal, who had conceded at least two goals in each of their previous four Premier League games.

“It was a difficult game,” said Sokratis. “We know they were under pressure because they had to win the game and we spoke before the game and said they were a very good team in the transition so we don’t need to lose easy balls.

“I think we played compact, a team that was better in the defence and because of this it was a good game for us.

“Also we had our moments after the goal we scored. We had two big chances but of course for 15, 20 minutes they pressed us and we had to defend well.

“I think we did that much better than in other games, we were more disciplined and like a team in the difficult moments when we know we have to defend better.”

The result saw Arsenal edge back above West Ham into the top four in the table.

They are aiming to avoid missing out on Champions League football for a fourth successive season and, with United, Tottenham and Chelsea all having made underwhelming starts, this appears a golden chance.

Sokratis said: “It is a long road, I think it will be very difficult for all the teams and it is very important for us that every game we try to win at home. And away from home, last year we didn’t have good results, so don’t lose. It is very important we are disciplined and take a point away from our home.”

High points from Monday’s contest included the performances of 18-year-old Bukayo Saka and Matteo Guendouzi, but Granit Xhaka again came in for criticism.

Given the permanent captaincy last week after being booed by his own fans when he was substituted against Aston Villa, Xhaka was criticised in some quarters for appearing to duck out of the way of Scott McTominay’s shot for United’s goal just before half-time.

“Of course they have to understand that we are here, we give 100 per cent and then the first time they win, we win also.

“For example, I am 31 and I don’t have a lot of personal achievements – my best achievement is if this team win.”